When I was filming in Basilicata a couple of years ago, I went into a trattoria because of a wonderful smell: I discovered a lamb ragu steaming away in the kitchen. A plate of hand-made strozzapreti (''priest stranglers'') and this lamb sauce was presented to me, and the taste is still strong in my memory. The priest stranglers are noodles, made from durum wheat semolina and water, which are slightly twisted on a thin rod such as a knitting needle. It is most unlikely you will find these in a shop, which is why I have chosen mafalde, the long pasta ribbons that are curly on one or both sides. This recipe is associated with the south of Italy, with Basilicata and Puglia.

Alternative: This would also be good with fusilli or even paccheri instead. 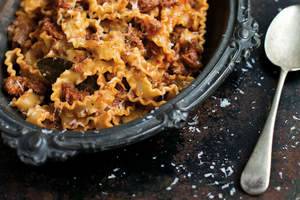 1. Heat the oil in a large saucepan and add the onion. Fry until soft, about eight minutes. Add the chilli, carrot, celery and bay leaves and stir-fry for about five minutes more. Now add the lamb and the sausage, and fry, stirring from time to time, until the meat gets some colour, about five minutes.

2. Add the red wine, bring to the boil and let the alcohol evaporate for about two minutes.

3. Add the tomatoes and the tomato paste and a little water if necessary. Cover and leave to cook slowly for 1½ hours, uncovered, stirring from time to time. Add salt and pepper to taste, cook for another 20 minutes, and the sauce is ready. Should you have too much liquid fat swimming on top, take a leaf or two of absorbent kitchen paper, lay flat on top of the fat for a few seconds then discard.

4. Cook the pasta in plenty of boiling salted water for eight minutes or until al dente. Drain the pasta and toss in a little of the sauce.

5. Divide between warmed plates, topping equally with a piece of lamb and a piece of sausage. Sprinkle with pecorino (or, if you prefer, parmesan), and enjoy with a glass of Pugliese red wine. 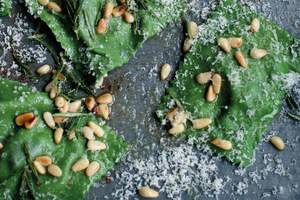 This is the time to show a little skill. Burrata is an extremely delicate and soft mozzarella made from cow's milk in Puglia: it is said to have been invented in the 20th century as a means of using up the ritagli (scraps or rags) of mozzarella. An outer layer of ordinary mozzarella encloses these scraps of mozzarella mixed with cream, giving it the most wonderful flavour and texture. For this you require freshly made pasta with spinach to give wonderful colour. 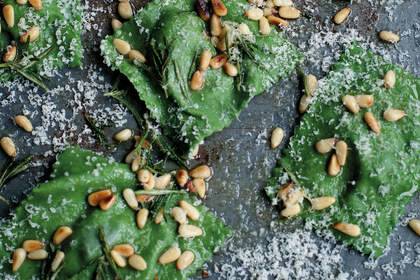 1. Roll out your pasta, by hand or machine, to two long sheets, about 15-20 centimetres wide, and two millimetres thick.

2. Cut the burrata into 12 pieces. Put half the pieces evenly along one side of one sheet of pasta, and sprinkle with some of the parmesan. Wet all round the pieces of cheese with water and fold over the other side of the pasta sheet. Cover the six morsels by pressing the dough all around each to expel the air. Cut into rectangles with a pasta wheel. Cover with a tea towel while making the remainder.

4. Cook the ravioli gently in plenty of boiling salted water for two to three minutes or until al dente.

5. Melt the butter in a pan with the pinenuts and rosemary. Let the hot butter absorb the herb flavour for two minutes.

6. Scoop the ravioli out of the water and place in the pan with the melted butter and pinenuts. Serve the pasta on hot plates, sprinkled with parmesan. 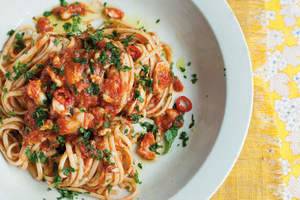 One of the most delicate fish, the red mullet has only one disadvantage: its bones. The Italians have been exploring the new wave of spices, and several are now used in the first Italian attempts at ''fusion'' cooking. (In fact, the use of spices is a rediscovery because they were used in Italy in the Middle Ages.) One of their favourite spice mixtures is curry powder which, if used minimally and not generously as in the Indian way, adds a completely new dimension of flavouring.

2 fresh red mullet, about 500g each, cleaned and scaled

salt and plenty of pepper, to taste 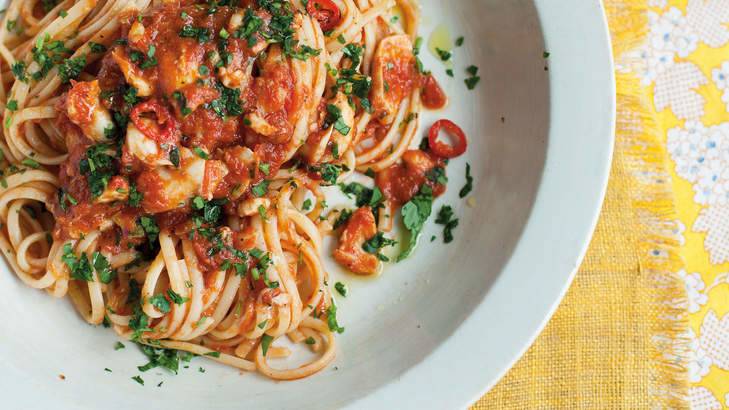 Alternatives: You could use spaghettini or tagliatelle instead of the linguine, and the red mullet could be replaced by blue-eye trevalla or scallops.

1. Heat the olive oil in a frying pan, and add the fish, the unpeeled garlic and the chilli. Fry the fish gently for 10 minutes on each side, then add the wine and leave to cool down.

2. Take the fish out of the pan and fillet them: discard the fish heads and all the bones and set the flesh aside. Add the tomato passata to the juices in the frying pan, along with the curry powder. Simmer a little, about 10 minutes, then add the fish meat, the parsley and salt and pepper to taste.

3. Cook the pasta in plenty of boiling salted water for seven to eight minutes, or until al dente. Drain well, add to the sauce, mix well and serve hot. No cheese here. 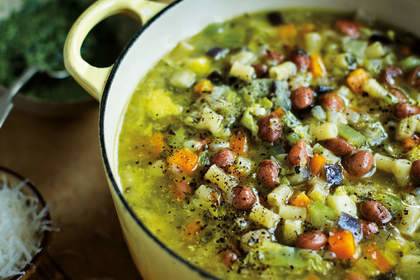 This version of minestrone is influenced by those served in Lombardy and Liguria, but you will find similar soups – and some surprisingly different – throughout the country. Most minestrone use bits and pieces of vegetables
left in the fridge, like zucchini, eggplant, carrot, celery, cabbage, quartered brussels sprouts etc. You could add some potatoes as well, to add thickness.

about 1kg vegetables (see above for suggestions), prepared and cubed

Alternatives: If you don't want to have a vegetarian soup, you could add some Parma ham, cooked ham or bacon chunks. You could also use rice instead of pasta, or any other shape of pasta.

1. Put the oil in a pan and fry the garlic and onion for a few minutes.

2. Add the stock and prepared vegetables, and cook for about 12 minutes.

3. Add the pasta and drained beans, and cook until tender, about another six to seven minutes, then remove from the heat.

4. Mix in the pesto and salt and pepper to taste, and heat very gently. Serve immediately, sprinkled with
parmesan.

This is an edited extract from Pasta by Antonio Carluccio. Published by Quadrille, RRP $45; available in stores nationally.