Six months ago Tim Bailey was unceremoniously sacked from a job he loved with a company he'd been with for 29 years. And, while it might have knocked the wind out of his sails, these days he reckons he couldn't be happier and is on top of the world.

The man from Narrabeen on Sydney's northern beaches was among a slew of high-profile Network 10 presenters, including Kerri-Anne Kennerley, Natarsha Belling and Mike Larkan, who lost their their jobs as part of a cost-cutting drive inside the broadcaster's news division.

"It was less than a five-minute telephone call," Bailey said of the day he was sacked.

"You know that it's coming one day, it's like the old footy coach analogy - you know there's a bullet flying around with your name on it, you just don't know when it's going to hit you. That day really showed that television can be treacherous, it can be brutal and people will betray you and not be honest with you, I wouldn't have minded a face-to-face and it didn't happen."

"There was no doubt there was a very big betrayal, I had no idea, I was blindsided," he said. "Then, 10 minutes later, I saw the good in people and before I could fall down Ben Fordham picked me up."

He was hired for Fordham's 2GB radio program, which he started almost immediately.

Bailey, who turns 58 on February 19, said while it was heartbreaking at the time, his life has now turned around in so many positive ways that he never imagined. 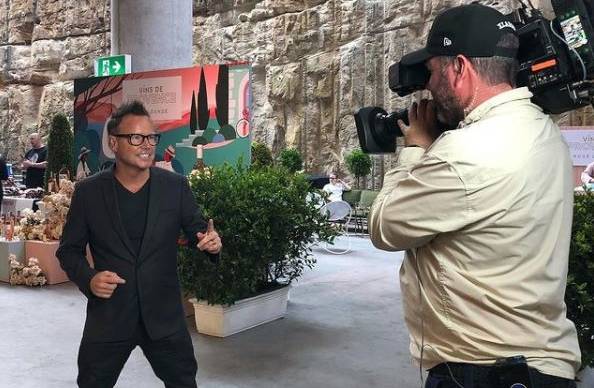 ON AIR: Tim Bailey was arguably Australia's most well known weather man during his 29 year reign at Channel 10.

Born in Tasmania, Bailey's first foray into journalism was when he was just six years old with his brother Scott 'Boo' Bailey.

"He and I actually put out a newspaper together, he was four and I was six and we sold it around the neighbourhood. I was the journalist, he was the artist. Today I'm still a journo and he's still an artist and Mum's still got that newspaper," he said.

His path into journalism and media was meant to be, with his family having a long history in all facets of print media, including political cartoonists, journalists, sub editors and editors. His first 'real job' at a newspaper was as a copy boy at the Hobart Mercury when he was 19 years old. Soon, he was working as a journalist in the Gold Coast and then he started his own news agency where he'd write and sell his stories to publications.

"I'd sell my stories like camels that drink XXXX beer and dogs that can water ski and I sold them all around the world," he said.

Bailey then moved into television and worked on Good Morning Australia, Big Breakfast and Totally Wild, and the Commonwealth Games, before realising he wanted something long-term, with many of his jobs lasting for "a week here or a week there" or "a year here or a year there".

"A week later he [Bury] got sacked and they rang me and offered me the job so be very careful what you wish for and I didn't even apply. I just knew it was meant to be, I certainly didn't envisage that I would then go on and have 29 years with the network." 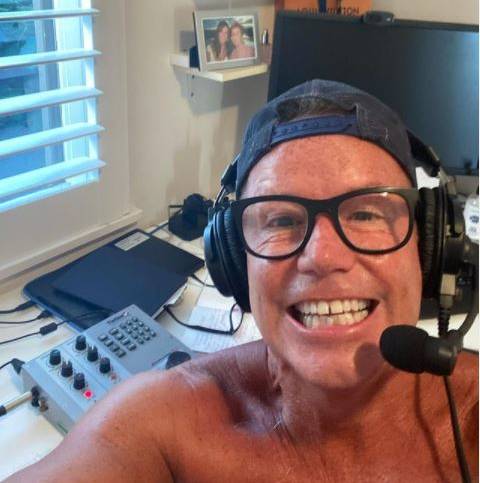 ON AIR: From the beach to the radio - Bailey broadcasts life on 2GB from his home in Narrabeen.

Bailey's sacking made national headlines and resulted in an outpouring of public support, and within minutes he was offered a gig as a presenter on Ben Fordham's breakfast show on 2GB. A month later he was brought on as the the chief weather officer for Allianz insurance.

Today he splits his time between the two roles, and has also started writing children's books which he hopes to release later this year. While Bailey and his wife Sam mightn't have children of their own, he said writing books aimed at kids was an obvious choice.

"Soon I'll be introducing people to The Stuck Duck, Grant the Ant, and to Doodle the Poodle. I have 10 in the pipeline and I've got publishers interested right now and I've turned two or three of them into songs."

After three decades as 'the weather guy Daily Bailey' is hyper aware of the opportunities he's had in his beloved media industry and the support the public's shown him.

"I'm just really proud of how people have welcomed me into their home and into their televisions, into their radios, on their social media and how they're really just engaged with me like I'm a real person, that's the greatest highlight I have," he said.

"I have a really, really wide demographic of people from five-year-olds that I can engage with to 95-year-olds and a lot of people in between. I'm just thankful that I'm part of their lives daily, you can't ask for much more than that. And, to be doing something you love, I've got a grin on my face, I'm energetic, I love life and this new freedom." 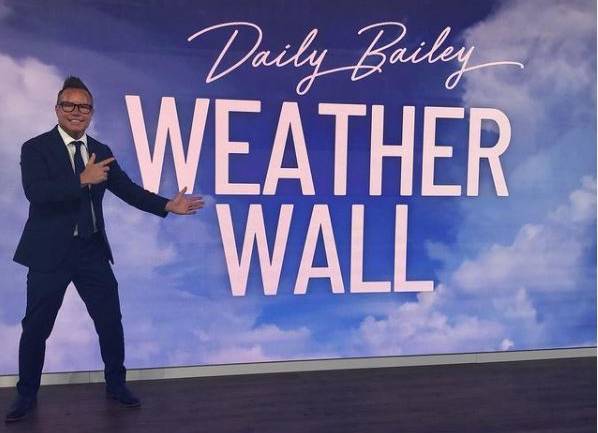 ON AIR: Tim Bailey was arguably Australia's most well known weather man during his 29 year reign at Channel 10.

He's as well known for his enthusiasm as he is for his tongue twisting ways of reporting the weather, but Bailey said his words weren't practiced or scripted.

"I just ad-libbed everything, I never used an autocue," he said. "I can ad-lib until the cows come home, that just comes naturally."

One of his most famous tongue twisters was: "Business of the brolly, predicted precipitation, drips and drops across roof tops and crops" and the presenter even used some of the words as hashtags in his final Tweet as he signed off from Channel 10.

"29 years with @Channel10AU comes to an end today. It was magnificent. Thanks for putting up with me. #predictedprecipitation #businessofthebrolly #dripsndropsacrossrooftopsandcrops" he posted on September 11 last year.

29 years with @Channel10AU comes to an end today. It was magnificent. Thanks for putting up with me. #predictedprecipitation#businessofthebrolly#dripsndropsacrossrooftopsandcrops

Love and life away from the cameras

Bailey and his wife Sam will celebrate their 13th wedding anniversary this year after tying the knot alongside Narrabeen Lagoon. The couple met in Thredbo and were friends for 10 years before they started dating.

"She's a genius and her heart is just the most gorgeous spirit I've ever met in my life and my life is just in a wonderful place because of her," Bailey gushes about Sam.

Together they're looking forward to life post-COVID when she'll be able to resume her international travels as head of marketing and communications for Varian, a global leader in treatment of cancer by radiation.

"She had 18 or 19 international flights last year," Bailey said. "When the world gets better I'll be her plus one and we'll just be wondering the world. I'm ready just to go away jump in the suitcase and go travelling." 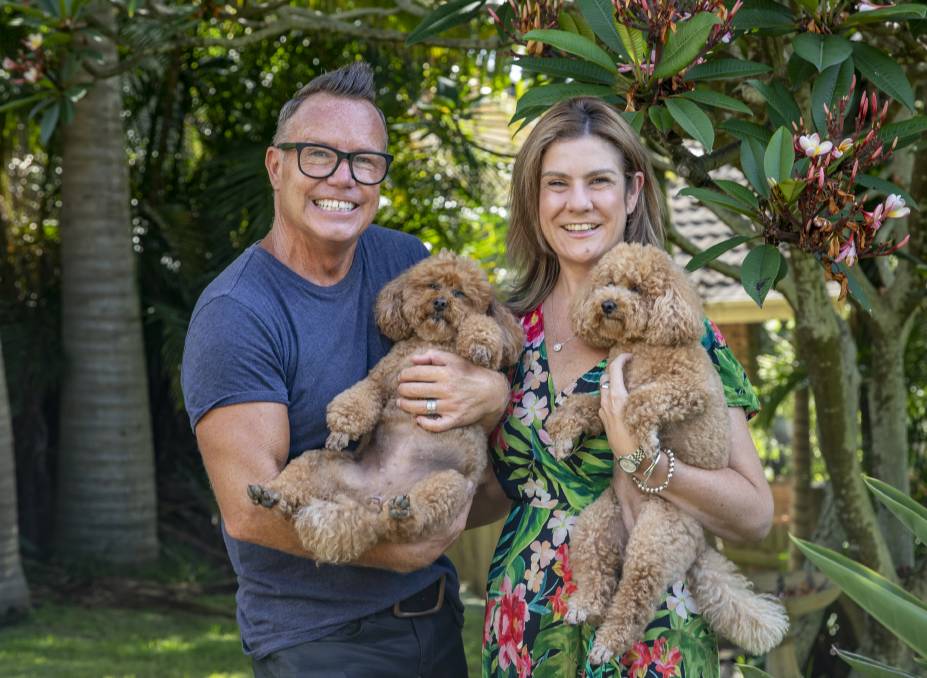 Don't be scared, be prepared

It wasn't until he started with Allianz that Bailey realised how many people weren't prepared for La Nina weather patterns.

"We got on the front foot three months ago and we did some surveys," he said. "Sixty-four per cent of people were thinking that La Nina meant this season would be more about bushfires than it would be heavy rainfall, well that's proven to be a bad belief.

"Get into your gutters, get into your downpipes, make sure they're clear. Have an evacuation plan. Most people say 'look I'm prepared for storms on the Beaches' but most people haven't even got spare batteries for their radio or a decent weather app on. It's one thing to say 'yeah I'm across this' but it's another thing to be across it and to be prepared.

"Most of the problems come from the sky and Allianz now has a person who has been looking at the sky and looking at key weather events for 30 years and I'm passing on my knowledge and trying to keep people safe."

This story What the country's most famous weather man did after he was sacked first appeared on Northern Beaches Review.