24-year-old Cameron Melling woke up at 2am with a high temperature and raspy cough.

Within 12 hours he was on a ventilator at Canberra Hospital. Two days later he was on the brink of death with a partially collapsed lung.

Only few weeks earlier, Cameron was enjoying life in an opened-up Canberra, working and spending time with his girlfriend, friends and family.

"I'm going to work, everything is fine, and then four, five days later, I feel like I'm dying," he recalled.

"[I'm now] coming to the realisation I probably was."

Three months after nearly dying from the virus, Cameron is opening up about his harrowing experience to encourage other young men to get vaccinated against COVID-19. 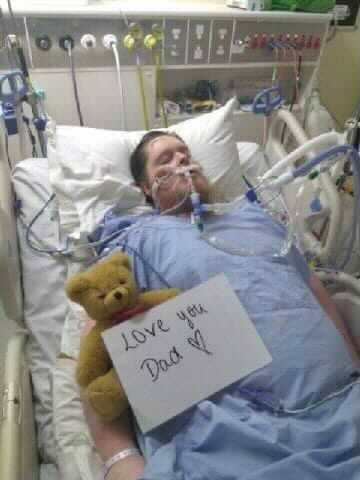 Cameron was a tertiary case linked to the Fiction nightclub outbreak. As he puts it: "Someone knew someone who happened to know me."

Three of the five members in the household tested positive to COVID-19, but while Cameron initially felt "horrid", he wasn't concerned.

"I have no pre-existing medical conditions, I'm a bit overweight and that's about it."

Cameron said he woke up in the early hours of September 1 with a temperature of 39.8 degrees and an incessant cough.

He called the ACT Health's COVID hotline to ask for some advice and an ambulance was called to his house. 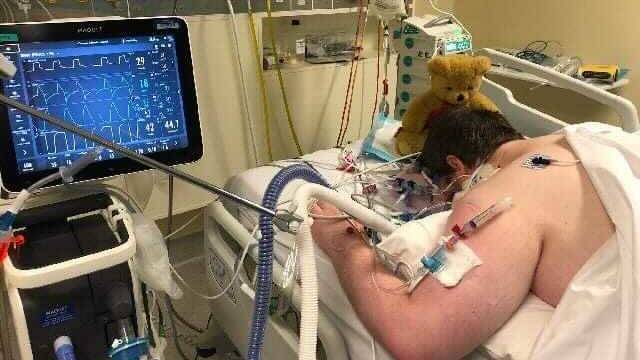 The time between being put under sedation and waking up is a blur.

"They took me up to one of the wards. And then the next thing I remember, it was nine days later," Cameron said.

"It honestly was a bit touch and go there; they really weren't sure how I would end up," he said.

"There is a possibility I wouldn't have made it, and that's a bit scary to think about."

Head of Infectious Diseases at Canberra Hospital Dr Sanjaya Senanayake said while older people and those with underlying conditions were more likely to develop severe COVID, being young and healthy is no guarantee against it.

"A young, seemingly healthy person can still end up in intensive care with COVID," he said. 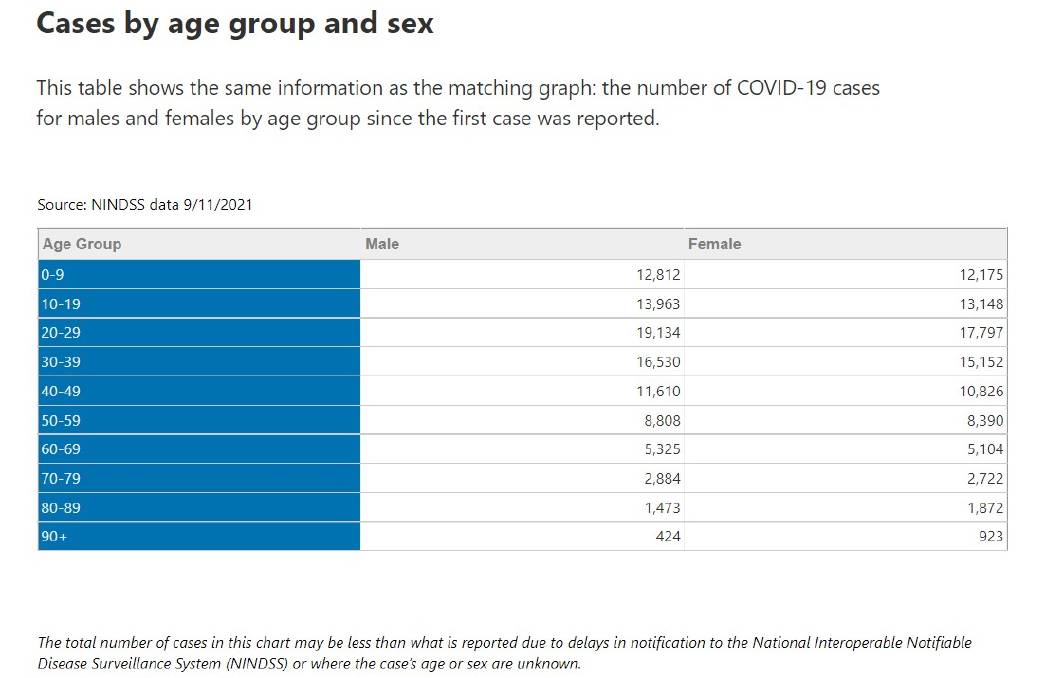 Victorian data from 2020 suggests one in four COVID patients put on a ventilator do not survive.

Cameron was one of the lucky ones.

Waking up alone in ICU

"I got a laugh because I said it could be anyone at this point," he said.

Being sick with COVID-19 is particularly lonely. There's no family bedside, and even hospital staff have to keep their distance.

"For the past two weeks, the only time someone has touched you is to stab you and draw blood," Cameron said.

If Cameron had died, he would have been alone without loved ones.

"Patients are staying in ICU and sometimes dying in ICU without having that normal, physical farewell with their family," Dr Senanayake said.

"Even for intensive care staff to see that, it's a horrible, horrible process." 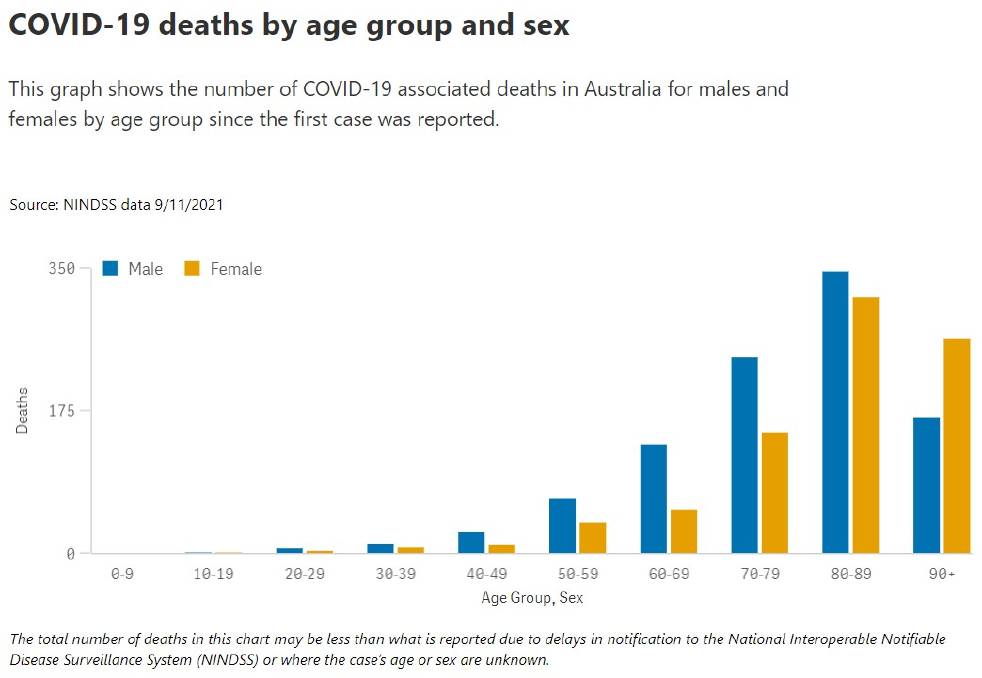 Some COVID patients become paranoid and experience delusions; others even hallucinate or develop psychosis.

"Meds turn me into a bit of a Gollum. I got very sarcastic, and I think it was very horrible at one point," Cameron said.

"There was just complete lack of control. And of course, anaesthetics can cause paranoia. That just escalated into a full-blown freak out meltdown.

"I couldn't walk, I could barely breathe, mentally, my brain is freaking out, but physically, my body's like, oh God, we can't do this. We can't get up [but] I'm desperately trying."

Cameron can still remember some of the "very bizarre" dreams. Frozen custard made an appearance.

If a COVID patient is hospitalised, Dr Senanayake said they might need help getting oxygen into their lungs, intravenous fluids to counteract diarrhea or nausea, or treatment for high fevers.

"If they end up going to intensive care, that means they're not good enough to be on a main ward in the hospital, and that something really bad is happening," Dr Senanayake said. 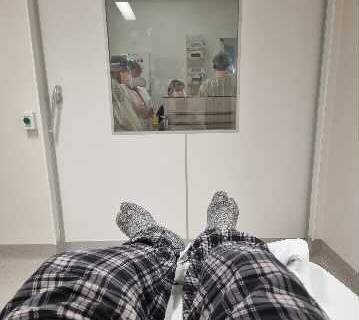 A photo Cameron took while in hospital. Picture: Supplied

He said with COVID patients, it usually means they need intubation to ensure they get enough oxygen.

Having been in the ICU for so many days, Cameron was weak when he first woke up. His mouth was dry from being opened for so long, and he was desperate for water.

"There was one point where one of them didn't realise [and] gave me the cup, and I'm just struggling to hold up this cup of water. In hindsight, very funny, but at the time, it was very distressing."

While it saves lives, Dr Senanayake said there are long-lasting effects from being in the ICU and on a ventilator.

"Being in intensive care is no joke," he said.

"The muscles and nerves of particularly your arms and legs can take a battering, and when you wake up, you might find that you're very weak."

Leaving hospital - the start of another battle

By the time Cameron was discharged on September 12, he was barely able to walk.

"I had dark circles under my eyes, I was sweaty, my hair was matted, I had needle marks. I looked horrible, I looked like Gollum."

Part of his beard had been shaved on one side only, turning an already unkempt "lockdown beard" into something from a horror movie.

Leaving the hospital was the first time his mother had seen him in weeks. 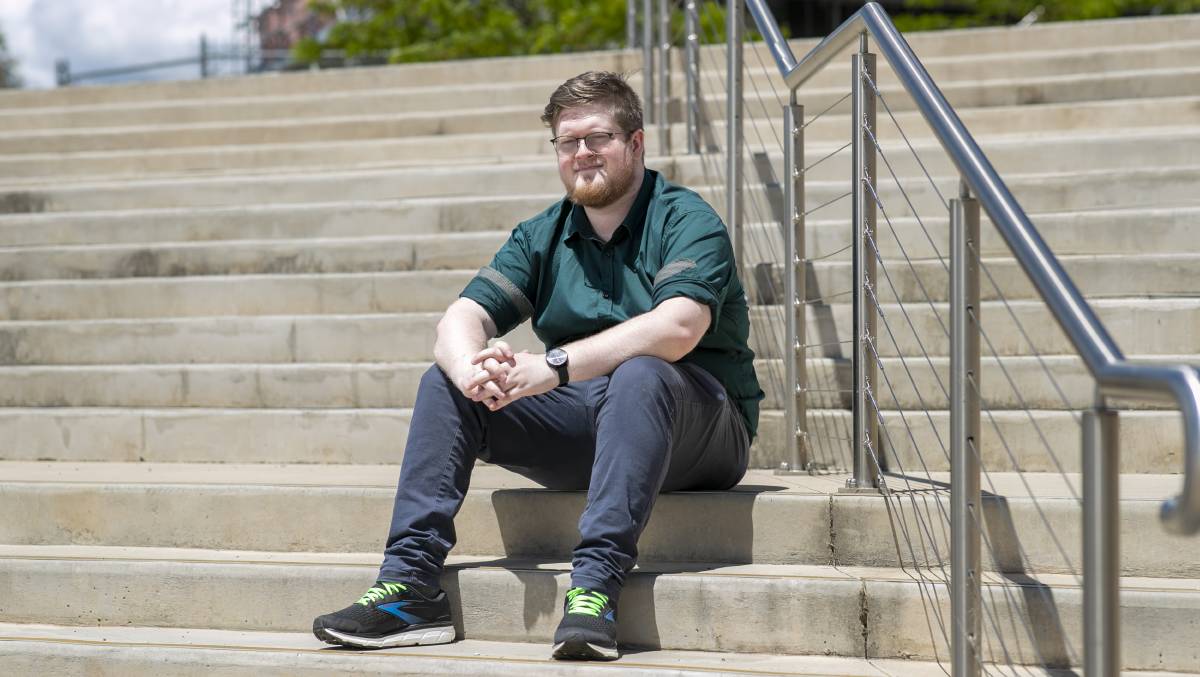 "Mum picked me up and gave me a hug that nearly crushed my ribs," Cameron laughed.

She took him to Goodberry's, a craving he'd had since lockdown but that had been exacerbated by "bizarre" frozen custard dreams while in hospital.

"That first night my partner had to wash my hair as I couldn't," Cameron recalled.

A few days after coming home, he tried to buy milk at Woolworths but could not make his way around the shop without stopping to catch his breath.

"Not being able to breathe to do basic things was shocking. It really caught me off guard," he said.

It has been three months since that day, and he is still recovering.

Cameron said he is having ongoing "whole body" rehab. He has forgotten how to walk at times, and has been exhausted by sitting straight in a chair. His voice has changed, and he still doesn't know if he will be able to run, sing in a deep voice, or take a full breath.

Things as simple as losing his sense of taste and smell have been confronting. Cauliflower tastes like Panadol, and Coke is bitter. But beans are great, which is an unexpected plus.

"Can't get enough of them now, like the taste is the best thing ever ... I used to hate them, so it's bizarre," Cameron said. 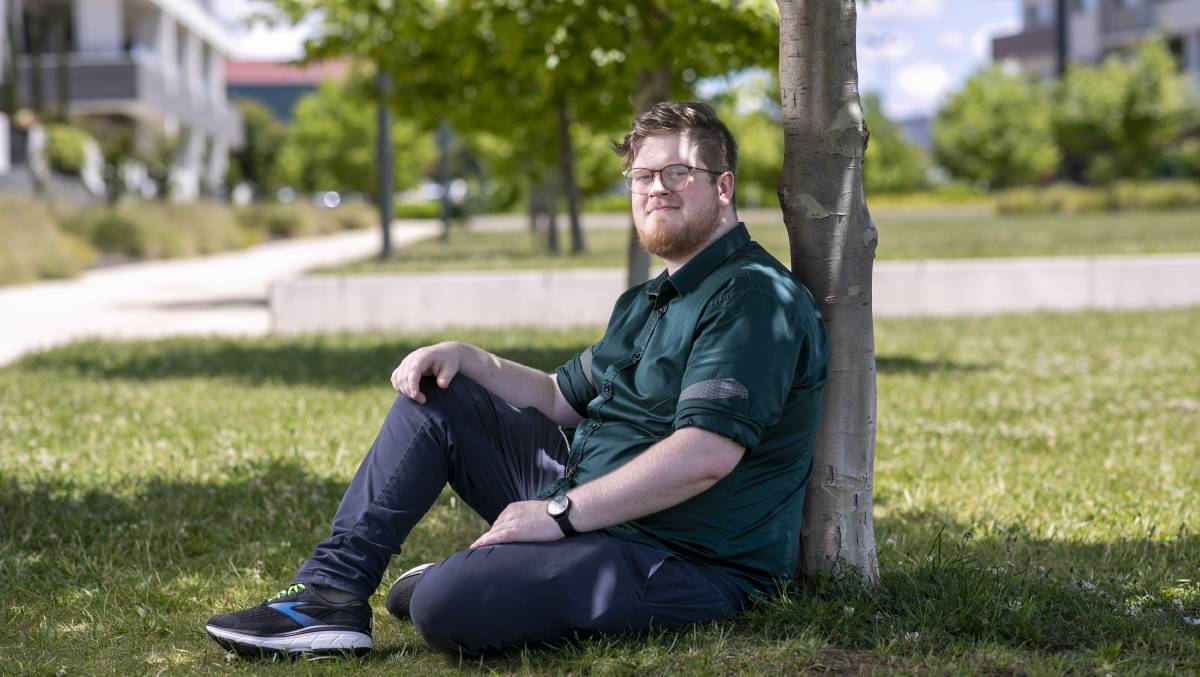 The ongoing scars of COVID

He still has internal and external scars from COVID.

He has a cut on his face from a pressure wound created from lying on his stomach in hospital; the needle marks dotting his inner forearm and wrist are a confronting reminder of nurses taking an "unholy amount of blood".

"I got home, and my partner brushed my inner arm, and I just freaked out because they just had to take so much blood."

He said he can feel scar tissue in his lung, which stops him from breathing fully. And he has pain at the bottom of his throat from the tubing.

"It's like somebody's got a pen, and it's just going *tap tap* at the back of my throat. It's really horrible," he said.

The future is still full of unknowns.

"I don't know if I'm going to recover. I really, genuinely have no idea if this is just how it is now, or if it's a temporary thing," Cameron said.

"This tickle at the bottom of my lungs. Will that go away? Or I'm going to have to spend the rest of my life [like this]?

"Am I going to struggle to walk and run for the rest of my life because of these things?

"That's something you expect for somebody who's post-surgery for lung cancer or something. Not got a cold and went into the hospital for a bit." 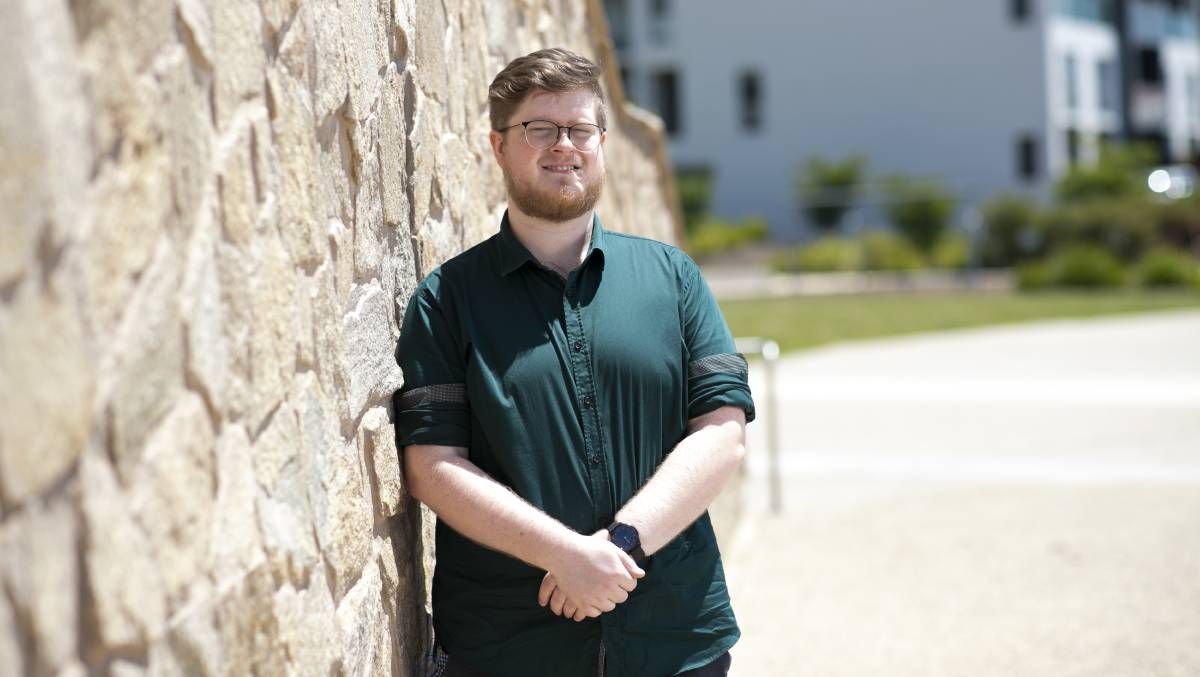 A strong message from a COVID sufferer

Cameron regrets delaying getting vaccinated, despite Pfizer only opening up to his age group on August 30 - the day before he was hospitalised.

Federal data shows males aged between 20 to 29 are the group most likely to get COVID. They are followed closely by females in the same age group.

As of Tuesday, over 95 per cent of over 12s in the ACT have been double vaccinated. And yet only 81.8 per cent of people aged between 20 to 24 have had two doses.

Of the 1448 deaths recorded from COVID on November 9, only 12 deaths were people aged between 20 and 29 years of age. Six were identified as male, and three female.

"Having perhaps not rushed it as much as I should have, I'm like oh shit, I really screwed myself," he said.

He has hit some major milestones since leaving the ICU. He walked to this interview and can hold long conversations. He can lift up his cat Azura. After three months off from his job in a pet shop, he will have his first shift back on Friday.

And on Tuesday, Cameron did something he is most proud of - he got his second vaccine.

"I'm not messing around; I do not want COVID again," he said.

"I don't want anyone else to get it."

He wants young people who've delayed getting vaccinated for any reason to take COVID-19 seriously.

"Maybe you'll be one of those lucky people who has a head cold for a week, but the alternative is ending up in the ICU for two weeks and then three months of recovery if you're lucky," he said.

He has a clear message for that group of 20- to 24-year-olds in Canberra that haven't been vaccinated.

"It's killed people, it's messed up people, it has terrified families. It's not fun, it's not pleasant, it's horrible. Just don't risk it," he said.

Our coverage of the health and safety aspects of this outbreak of COVID-19 in the ACT is free for anyone to access. However, we depend on subscription revenue to support our journalism. If you are able, please subscribe here. If you are already a subscriber, thank you for your support. You can also sign up for our newsletters for regular updates.

This story Cameron survived COVID on a ventilator, and now has a message for young men first appeared on The Canberra Times.