More than any other season, the Australian summer lends itself to a hive-mind of cultural introspection.

Extreme weather and natural disasters will often bully us into this annual existential stocktake, but we also find ourselves gazetted into the pursuit via the observance of an increasingly divisive national day or brought more gently to the table via beachside and barbecue reverie; thoughts unshackled for a few precious weeks from work and study.

Pondering that old macadamia nut - What does it mean to be Australian? - will generate as many new questions as answers.

Knowing this, social researcher Hugh Mackay once quantified Australia as an "uneasy blend of arrogance and timidity", while novelist Tim Winton once said the characters inhabiting his stories were "figures in a landscape". This streaming summer, we're lucky enough to have access to a pair of quality TV series both interrogating our national arrogance and our timidity, and both plonking figures in recognisable, albeit very different, Australian landscapes.

An original creation for Stan, The Tourist is a brash hell ride across the panoramic emptiness of South Australia, while Binge original Love Me lands us in the sleek claustrophobia of upper middle-class Melbourne.

Above all, both products set out to entertain, and do so admirably, yet manage to say a fair bit about who we are (or how we're perceived) along the way; all the more intriguing given the geneses of both enterprises are decidedly unAustralian.

Internationally co-produced six-part series The Tourist was written by Harry and Jack Williams, the British brothers behind The Missing and Baptiste. Their new show's aesthetic is unmistakably Down Under, yet their script betrays the fact audiences in the motherland and the new world were perhaps more in mind than those from where the action is actually based.

Meanwhile, also weighing in at (a much leaner) six episodes, Love Me is written by a talented Australian collective yet its vibe is decidedly icy; not surprising given it's based on the Swedish series Alska mig (and feels inhabited by the ghost of American Alan Ball's wonderful Six Feet Under).

Other than the fact charismatic Shalom Brune-Franklin plays great supporting roles in both The Tourist and Love Me, each effort shares little in common, yet you leave both with the satisfaction of having witnessed the results of some exceptional work.

As suggested by the title, The Tourist plays on the fears and anxieties about which breathless travellers to this harsh nation of ours have been writing home for years. As amnesiac protagonist "The Man", Ireland's Jamie Dornan mounts the kind of confused, desperate journey across the slag-heaped badlands of our dead centre which never really allows him, or us, to get a proper foothold. Like The Man, whose identity is eventually revealed (hint: it's not Anthony Mundine), we're forever on the outside looking in, sniffing the wind as if something's not quite right with all these kooky Aussies. As The Man gets closer to the reason why someone may be out to kill him, we're certainly hooked, yet, as cynical Australians, we're never completely sold on the whole idea being thrown up by this unapologetic bower bird of a show, which borrows from a dizzying collection of influences - Memento, Wake in Fright, Wolf Creek, Fargo, Duel, U Turn; a hint of David Lynch here, a dash of Nicolas Roeg there, just a whisker of Dennis Potter ...

While the predominantly Australian cast is excellent, the direction taut and cinematography breathtaking, the script tends to pepper us with little irregularities capable of jolting us from our suspension of antipodean disbelief.

Did someone really just say "ketchup"? Is that Mariachi music in the air? Are we really sitting in a "diner"? Are they tortoises, not turtles? Is that really comedy duo the Umbilical Brothers hamming it up egregiously as a pair of chess-playing helicopter pilots?

Meanwhile, over on Love Me, the authenticity is rolled gold (the standard, according to this wry, funny show to which seniors should be aspiring when booking romantic getaways). Instead of waiting out dust storms under tarps or digging men out of oil drums buried in the dirt, we're in an architecturally designed brick bungalow in an umbrous Melbourne suburb; we're dishing up an anniversary dinner on stoneware crockery. We're watching two adult kids bicker as their mother battles chronic pain caused by a serious car crash; we watch a husband battle in vain to lift his languishing wife's spirits.

As these family members experience the embrace and prickle of love out in the city and beyond, we're reminded of how a polished script combined with subtle performances (Hugo Weaving and Bojana Novakovic are especially good) can tell us as much about who we are as Australians than yet another headlong plunge into the cliche of the scary Never Never. A sideways glance during a funeral, scavenging the scraps of your last toilet paper roll, mistaking a recorded voice for the real thing while on hold - shiny little gems to be collected along the way; breadcrumbs leading to quiet revelation. 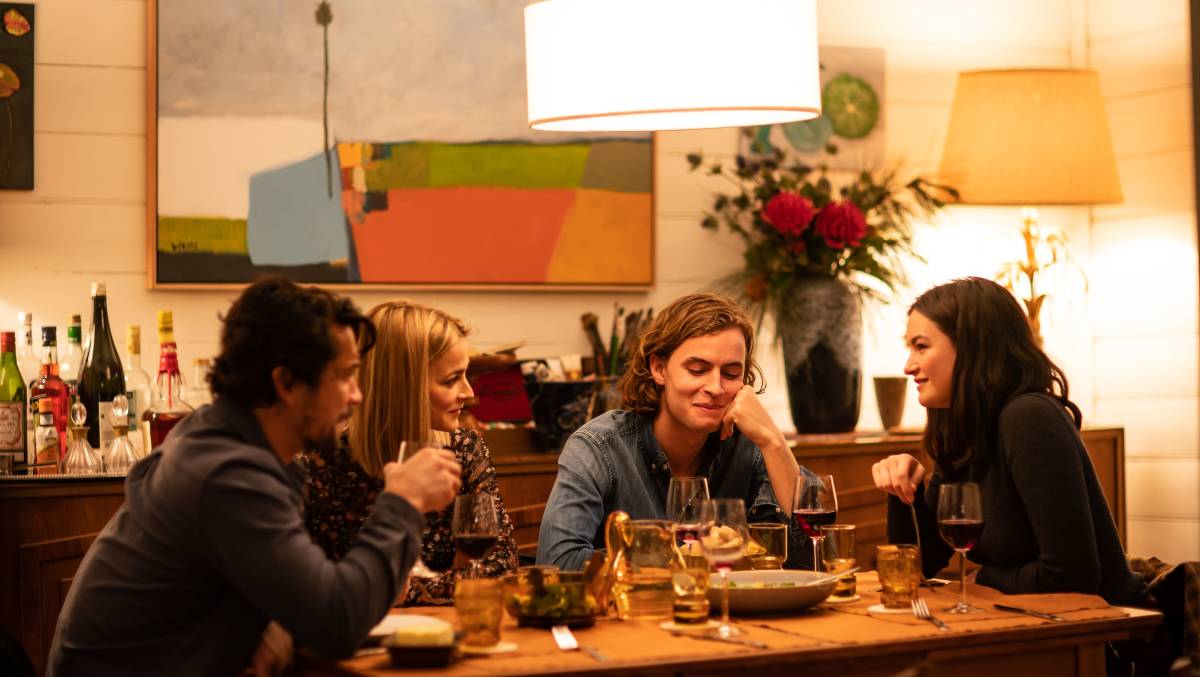 Love Me (directed by Emma Freeman) also carefully navigates the different age groups, focusing on the push and pull factors which inform the fraught decision-making processes around affairs of young and ageing hearts (tattoos remain a stupid idea).

The two countries presented by The Tourist and Love Me may be wildly different, but both are the products of truly outstanding local talent, something which should swell us with pride this summer.

You can't get more Australian than that.

This story The Tourist and Love Me: take a trip across two very different Australias first appeared on The Canberra Times.