What is Australia's national dish? Some would argue the chicken parmi, the ubiquitous schnitzel found on many a pub menu, might come close. Others would argue pavlova (ignoring the arguments with New Zealand). Perhaps prawns on the barbecue, a roast leg of lamb, some cheesy scrolls filled with Vegemite or a simple meat pie? Would you ever consider a dagwood dog, or a chocolate crackle (did you know Copha is unique to Australia?) or a delicious dip made with nothing but a tub of sour cream and some packets of French onion soup?

Ross Dobson wasn't trying to narrow it down to one dish when he was given the task of compiling recipes for Australia: The Cookbook.

"But it certainly sparked plenty of conversations about what recipes should be included," says the chef and author.

Here's four of his recipes from this fabulous book to share for Australia Day. 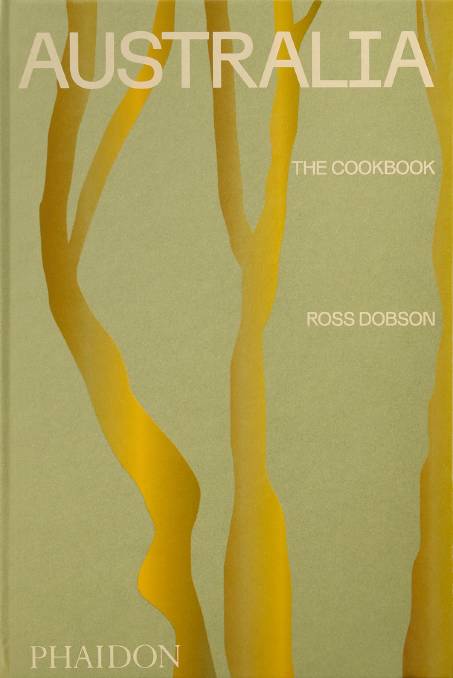 Fun fact. The largest lamington ever made weighed 2361 kilograms and was assembled by Quality Desserts and the Toowoomba Chamber of Commerce at Newtown Rugby Club, Toowoomba, Australia, on June 11, 2011. But lamingtons go back much further than 2011. Recipes start to appear just before the forming of the Federation in 1901. There are many urban myths surrounding this iconic cake. One story goes that they were made by accident. It is said that the servant to a Lord Lamington (British born, Queensland resident) supposedly dropped a sponge cake into a bowl of melted chocolate. To avoid waste, and so it could be eaten with fingers without a mess, the cake was then covered in coconut.

There is a claim that lamingtons make an appearance a bit earlier in New Zealand, where they were originally called wellingtons. This reflects the enmeshed relationship between Australia and New Zealand. There is an ongoing and friendly rivalry between these two countries over other foodie things like the pavlova and flat white.

Lamingtons are firmly established in Australian food culture. It's not so common now, but they were often made and sold by volunteers as a form of fundraising for charities, clubs and schools. Such events were known as "lamington drives".

There are many variations of this recipe but they all begin with the sponge cake. The cake is cut into squares or rectangles, dipped in a mixture of icing sugar and cocoa powder before being dressed up in a coating of coconut. This is the basic idea. Today, you will find "gourmet" lamingtons that are dipped in melted dark chocolate and the fine desiccated coconut replaced with coconut flakes. Some versions are dipped in a panna cotta-type mixture before being hit with chocolate and coconut, while others are filled with jam and whipped cream.

This recipe sticks pretty much to the traditional. The sponge here will look like it doesn't have enough butter but it does - combining boiling water with butter is an old family recipe of mine. And make the cake the day before you make the lamingtons, as this will make for a far superior lammo. Yes, even the "lamington" is abbreviated, to "lammo".

For the chocolate icing:

1. Make the sponge the day before. Preheat the oven to 180C. Grease a 33 x 23 x 7cm baking pan with butter and line with baking paper.

2. Sift the flour and cornflour onto a clean dry plate and set aside.

3. Put the butter into a small heatproof bowl with 50ml boiling water and stir to combine, then set aside.

4. Put the eggs into the bowl of a stand mixer fitted with a balloon whisk attachment and whisk on medium speed for eight to 10 minutes until they have tripled in volume and are pale and creamy. Slowly add the sugar and whisk until combined. Reduce the speed to low. Pour in the butter mixture and whisk until combined. Use a large metal spoon to add half of the flour mixture and fold through. Add the remaining flour and fold through until well combined. Pour the batter into the prepared pan and bake for 30 minutes until golden. Leave in the pan for 10 minutes then transfer to a wire rack to cool completely. Cover with a clean dish towel and leave overnight.

6. To make the icing, combine the ingredients in a bowl and whisk with a balloon whisk to make a smooth and thin chocolate sauce.

7. Spread out the coconut on a plate. Pick up a sponge square with two forks and dip it into the sauce, then roll it in the coconut. Repeat with the remaining squares and serve them on a platter. 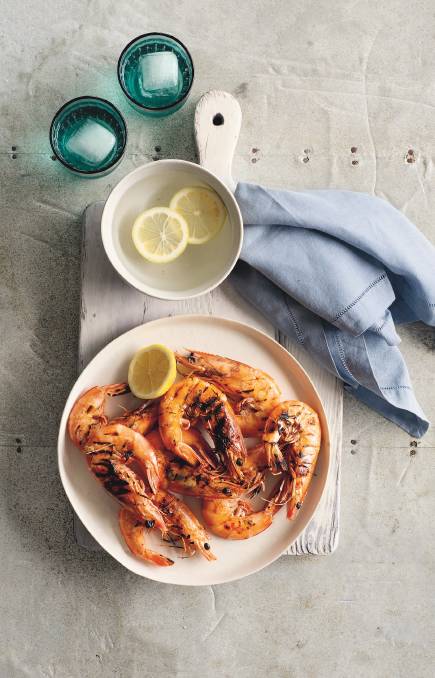 Prawns may well be the quintessential Aussie barbecue food. To cook on the barbecue, look for larger prawns that have not been frozen. Frozen seafood will cook very differently to fresh on the barbecue - it will ooze a lot of water and the texture will be soggy, instead of pleasantly firm. Large or king prawns will be easier to cook, and will be easier to peel and devein, either prior to cooking or at the table.

1. To devein the prawns without removing the shell, stick a toothpick through the top, arched part of the shell (imagine it having a back). You don't want to break the vein at this stage in the deveining proceedings. Rather, you want to use the toothpick to lift it out in one piece then use your fingers to slowly pull out the entire vein and discard. Your prawns are now ready to cook.

3. Serve with lemon wedges, finger bowls and lots of napkins. 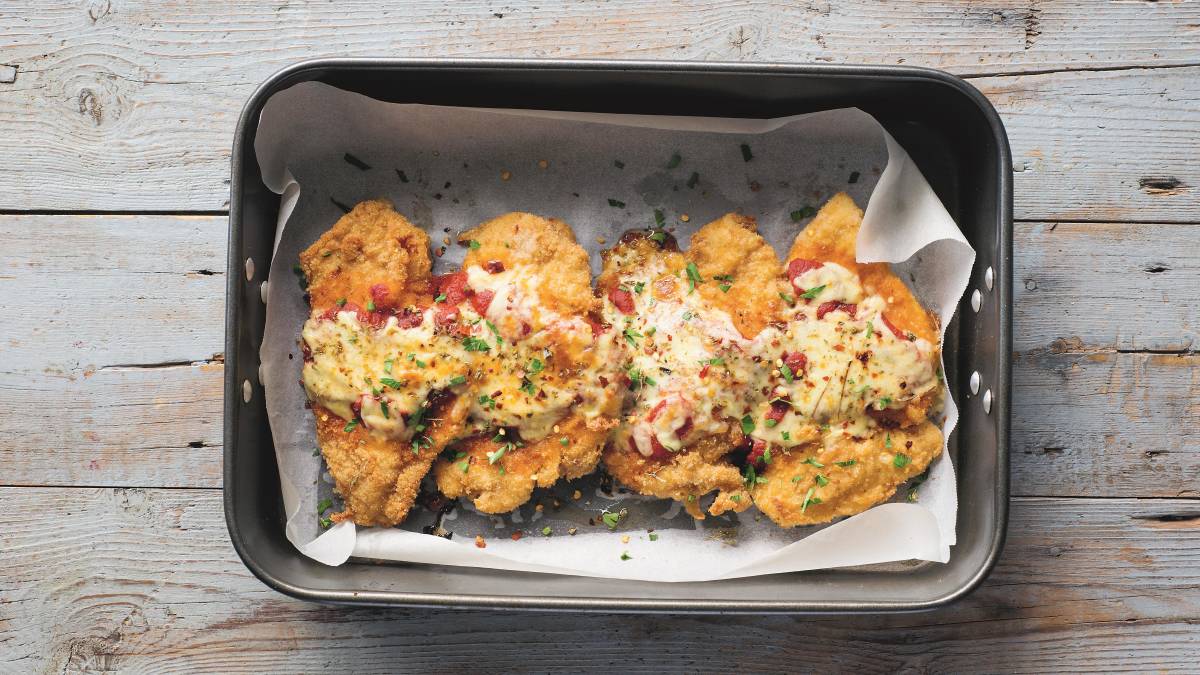 I'm not a gambling man, but if I were, I would bet that if you randomly chose a pub in Australia, you would find chicken parmi (parmigiana) - also called "chicken parma" - on the menu.

2 large skinless and boneless chicken breast fillets, about 200g each

1. Preheat the oven to 180C. Line a roasting pan with baking paper.

2. Put the chicken breast fillets onto a clean chopping board. With the palm of one hand on the chicken, carefully cut through the centre of the fillet, horizontally, to give two pieces. Repeat with the second chicken fillet. Put the four pieces of chicken between two sheets of clingfilm in one layer. Use a meat mallet or rolling pin to pound the chicken so it is an even thickness, ideally no thicker than 5mm, then transfer to a plate.

3. Put the flour onto a plate, beat the eggs in a bowl and put the breadcrumbs on the plate. Toss the chicken in the flour, then dip in the beaten egg, and finally press into the breadcrumbs until coated all over. Return to the plate and set aside.

4. Heat the oil and butter in a large frying pan or skillet over a medium heat. When the butter is melted and sizzling, add two chicken breasts and cook for five minutes on each side until golden. Adjust the heat if the breadcrumbs are cooking too quickly. Transfer to the prepared roasting pan and repeat to cook the remaining chicken, adding it to the pan.

5. Pour the tomato passata over the top of each chicken breast, add the mozzarella, Parmesan and a sprinkle of oregano, then bake in the oven for 30 minutes, or until golden. Scatter over the parsley and chilli flakes, if using, and serve hot. 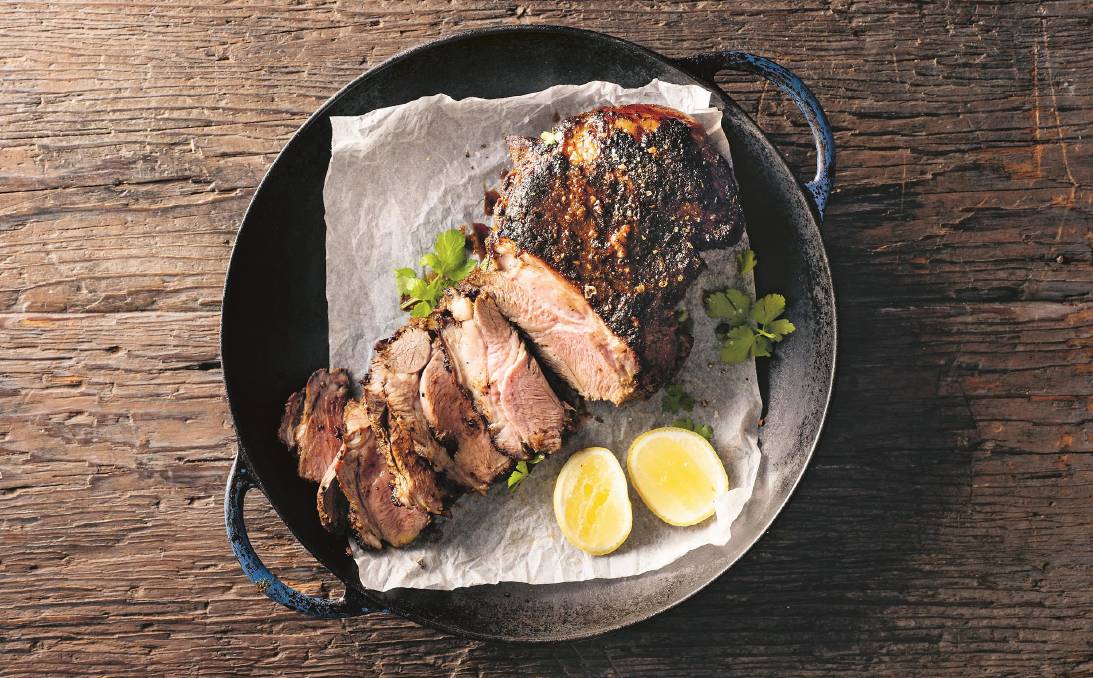 Boneless cuts of lamb are relatively new on the food scene - they were introduced to the market in the early to mid 1980s, which seems hard to believe. In 1985, the Australian Meat and Livestock Research Development Corporation promoted the new cuts as convenient and quick to prepare. Most of these cuts were small, but with the increase in popularity of cooking outside on the barbecue, larger deboned and butterflied lamb was also in demand. A whole boneless leg of lamb could be easily splayed out on a barbecue and would feed eight people, with salads on the side. Supermarkets will have "easy-carve" butterflied legs of lamb ready to go, but they are often marinated and can be very salty. For quality control, simply ask your butcher to butterfly the leg for you.

1. Leave any excess fat on the meat as this will prevent the meat from burning. Using a sharp knife, cut four to five shallow, diagonal slashes on each side of the lamb and put into a large, non-metallic bowl.

2. Combine the paprika, cumin, olive oil, lemon juice, garlic and salt in a food processor. Coarsely tear the bunch of parsley and throw it into the food processor, then process to make a chunky paste. Rub the paste all over the lamb and into the cuts, then refrigerate for six hours, or overnight.

3. When ready to cook, remove the lamb from the fridge one hour before cooking.

5. Slice the meat and serve.

This story Put another prawn on the barbie: cooking our national dishes first appeared on The Canberra Times.